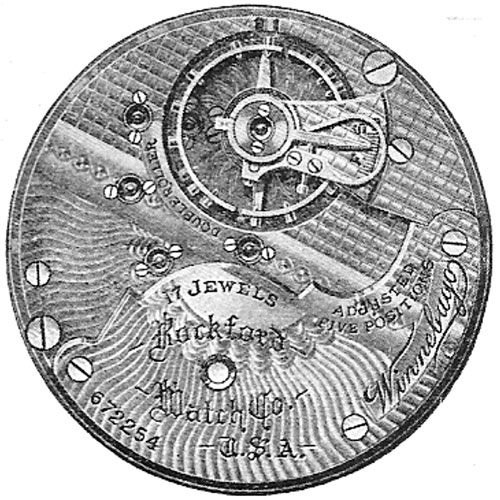 The Grade 205 is a 17j Openface watch maufacturered by Rockford, marked with the name "Winnebago." The size 18s, Model 9 movement features a damaskeened nickel finish and is adjusted to 5 positions, isochronism and temperature. During the time the watch was manufactured, it would have qualified for railroad service and is considered to be railroad grade. Each movement was fitted at the factory with a double-sunk glass enamel dial.

The Rockford Grade 205 is generally referred to as the Size 18 Openface "Winnebago" grade. With an estimated production of 4,200 in five distinct runs, the Grade 205 was more popular as the hunting Grade 200 counterpart, likely due to stricter railroad service requirements disqualifying hunting movements. Also available in two size 16 grades, the "Winnebago" movements are named after the Illinois county in which Rockford resides. Early Grade 205 movements are marked with "Adjusted" and "RG," indicating "Railroad Grade," while later movements are marked "Adjusted Five Positions" without the "RG" insignia. The elegant nickel damaskeening and polished steel partes compliments the attractiveness of the gold inlay lettering. According to catalog descriptions, the "Winnebago" was fitted with a "double-sunk glass enamel dial" featuring "red marginal figures."

The c.1907 Rockford Watch Catalog offered the 18 Size Winnebago for $33.00 in either open face (Grade 205) and hunting (Grade 200) configurations. The Winnebago movements were still being offered in the company catalogs as late as 1913.

No observations have been recorded within the last designated run [785,001-786,000]. If Rockford discontinued the Grade 205 Winnebago prior to fulfilling this serial block, actual production would be less than 4,200.