Movement adjustments were conducted at the factory to improve the precision and accuracy of timekeeping.


Due to the intrinsic properties of the materials and the variant forces applied to the mechanics by gravity, watch movements naturally deviate from accurate timekeeping when introduced to variances of temperature and position. Adjustments are conducted to precisely average these deviations to maintain a consistent rate of oscillation, resulting in accurate timekeeping.

Proper adjustments were extremely important for watches designed for railroad service. Due to intricate train schedules, errors in timekeeping were very dangerous. Once railroad standards were adopted, watches used in service were required to be keep accurate time within 30 seconds per week.

Prior to 1908, it was common for manufacturers to simply stamp adjusted movements as “Adjusted” without indicating the specific adjustments applied. This usually indicated the watch was adjusted to temperature and 3 positions. However, in some cases, this actually meant 5 or 6 positions. Once more stringent railroad requirements were implemented in 1908, manufacturers began stamping movements to specify the adjustments.

Adjusted watches usually sold for a premium due to the extra time and skill required for the adjustments to be conducted at the factory.

Unadjusted movements have been manufactured with no effort spent to adjust the watch to temperature or positional variations. Even unadjusted, these watches of lower quality were still expected to keep accurate time within a few minutes per day.

Adjusted to Temperature (or Heat & Cold)

Temperature adjustment was a lengthy process, usually conducted over the span of several days. Movements were carefully timed in climate-controlled boxes of both temperature extremes, 40 degrees for cold and 90 degree for heat. Rate cards containing time logs for each movement were then analyzed, and screws on the balance were adjusted accordingly by a skilled worker. The screws help compensate for the expansion and contraction in the metal balance wheel in different temperatures, averaging the timing differences between both extremes.

Isochronism adjustments were conducted to maintain a uniform performance while the mainspring gradually loses power from wind-up to wind-down. This was achieved by modifying the pinning and vibration of the hairspring, attempting to equalize the rotation angles of the balance wheel regardless of the strength of power remaining in the mainspring.

Position adjustments attempt to average the timing errors between positions for more precise timekeeping. Deviations in positional rates are caused by frictional and poise errors, which are more prevalent in the vertical positions. Depending on the qualifications for the grade determined by the manufacturer, the watch would be timed and adjusted using the following positions. 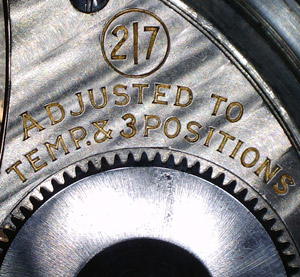 Pictured: A movement adjusted to temperature and 3 positions. 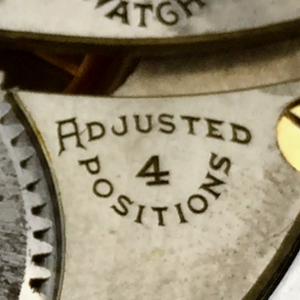 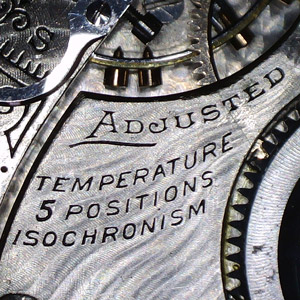 Pictured: A movement adjusted to temperature, isochronism, and 5 positions. 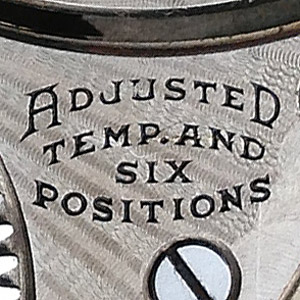 Pictured: A movement adjusted to temperature and 6 positions.

Some manufacturers eventually began marking movements according to the total number of adjustments. Eight or Nine total adjustments should not be confused with being adjusted to eight or nine positions. 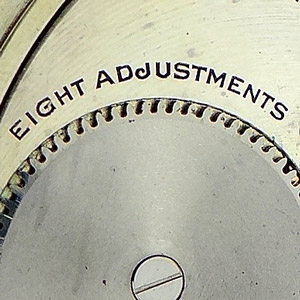 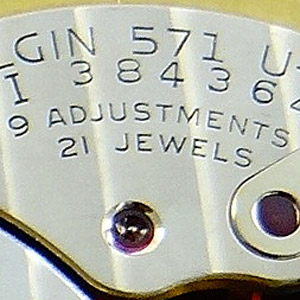