Jewels are hard minerals added to the mechanics of the watch to prevent wear at pivot and collision points. Hole jewels must to attached to the movement plates with precision, as any misalignment could potentially cause the watch to run improperly. 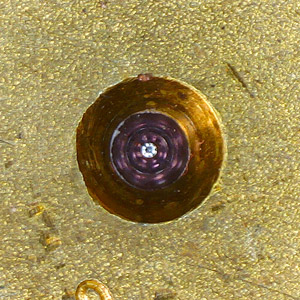 Friction jewels are carefully pressed into the holes of the movement plate using special tools. The fit is tight enough to hold the jewels in place permanently. Friction jeweling requires fewer parts and less time than screw-set jewels. As a result, friction jewels were commonly fitted into movements of lower quaility. This trend held true until modern jeweling methods were adopted. Friction jewels are also more difficult to replace if cracked or broken.

Identification: The plate jewels do not have screws adjacent to the setting.

Pictured: A closeup of a friction jewel setting. 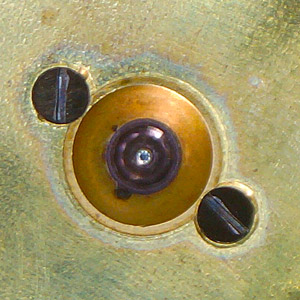 Screw-Set jewels are attached to the movement plate with small screws. This required more material and more time to assemble, and as a result, screw-set jewels were commonly fitted into movements of higher quailty. Screw-set jewels are also considerably easier to replace if one is cracked or broken. Premium watches usually contain screw-set jewels settings composed of gold.

Identification: The plate jewel settings are attached by small screws.

Pictured: A closeup of a screw-set jewel setting. 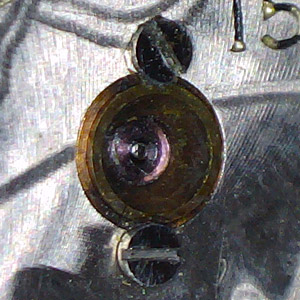 Raised screw-set jewel settings are almost identical to standard screw-set settings except the rim of the setting is raised instead of being flush with the top plate.

Identification: The plate jewel settings are attached by small screws and the setting has a raised rim. The screw heads will not be flush with the plate.

Pictured: A closeup of a raised screw-set jewel setting.