Private labels were typically produced in small batches, accounting for a small part of a more extensive run of similar movements. As a result, it is essential to expect a variety of private labels within the same run. Additionally, movements signed with standard markings usually dominate the run unless the factory specifically designated the entire run to fulfill special orders.

Modern collectors use the term "private label" to refer to any watch that was manufactured with custom markings or finishing to fulfill a special order. In original advertisements and materials, manufacturers generally offered these "Special Named" movements free of charge and offered special named dials for a small fee.

Most collectors prefer to acquire private label watches that are "double signed," featuring the special name on the movement and dial. With few exceptions, this ensures that the dial and movement were originally fitted at the factory.

If the movement is signed with a special name while the dial is standard-issue, it does not necessarily indicate the watch is not an original pairing. Most American watch manufacturers accepted orders for specially named movements with standard dials. This option was frequently executed since specially named dials raised the cost approximately fifty cents. Unless a private label has been established and is expected to be double-signed, a private label watch that is not double-signed simply results in more ambiguity regarding the originality.

Many private labels can be quickly identified by a jeweler name and location adorning the dial or movement. Without knowledge of the American watch industry, it is common to think these watches are the craftsmanship of some brilliant local watchmaker that worked tirelessly at a lathe in the back of his shop. However, the true manufacturer's identity can usually be revealed by analyzing the movement design and characteristics.

Wholesalers and larger retailers also benefited from bulk special orders produced by the American watch companies. Instead of individual names of jewelers and locations, these were often named for marketing purposes, adorned with trade names such as "Lakeshore," "Senate," or "The Banner."

Some companies ordered so many special order movements that they were able to have the manufacturer accommodate custom plate cuts and damaskeening patterns to be used exclusively for their movements.

Some manufacturers offered to mark movements with special names for no additional charge, especially for higher grades. Private label dials were typically offered at a premium of 50 cents extra.

In the same catalog, specially named Hampden movements are offered free of charge in "Roman or Script" letters. Old English style could be requested for two cents per letter, and dials were $1.00 extra. Delivery was promised within four to six weeks.

In the 1886 Robbins & Appleton Price List, specially named Waltham movements required one month for delivery and were offered free of charge in any quantity, except seven-jewel movements. Dials were 50 cents extra. 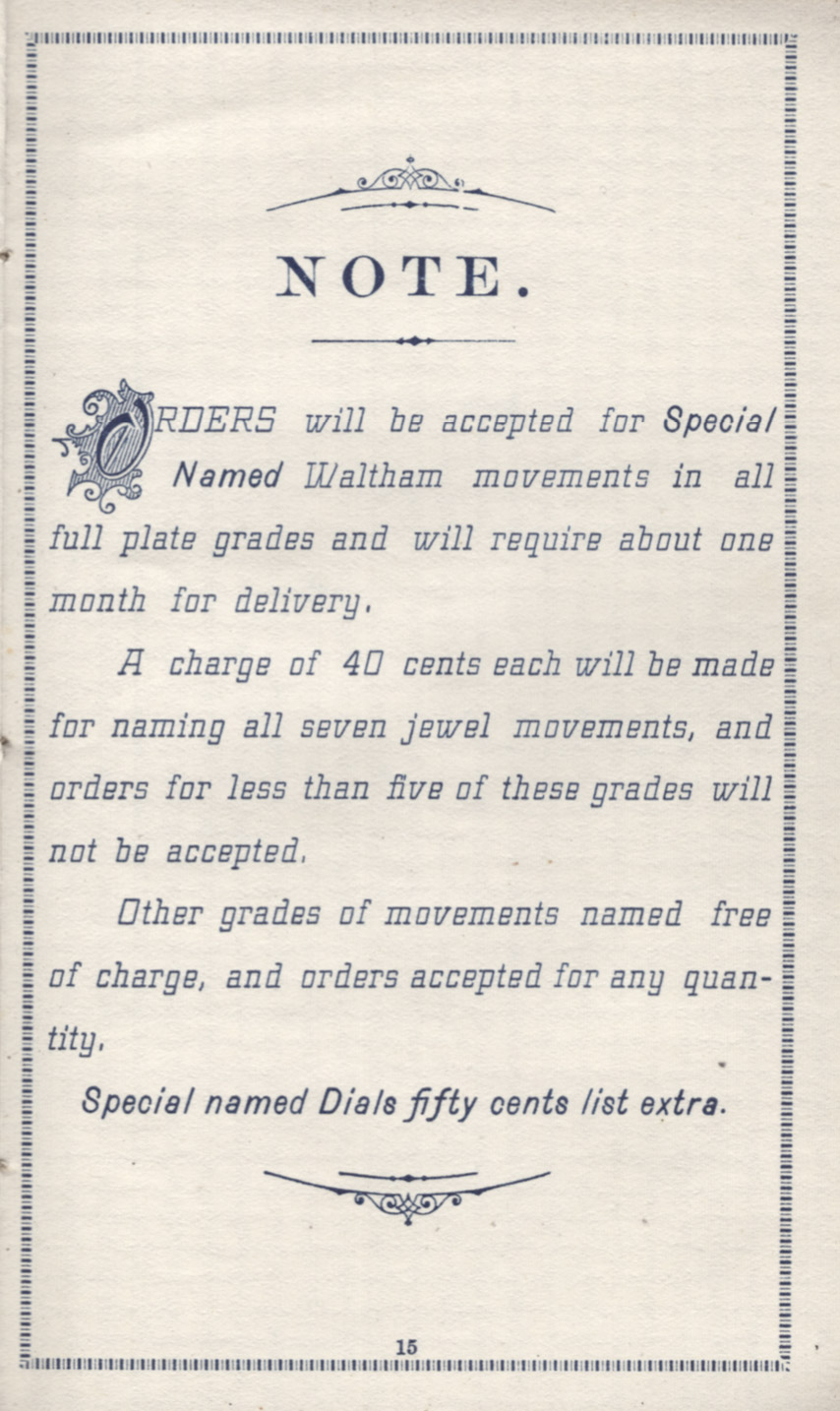 The 1905 Hampden Price List indicates the company accepted orders for special name movements in all grades, except seven-jewel movements. 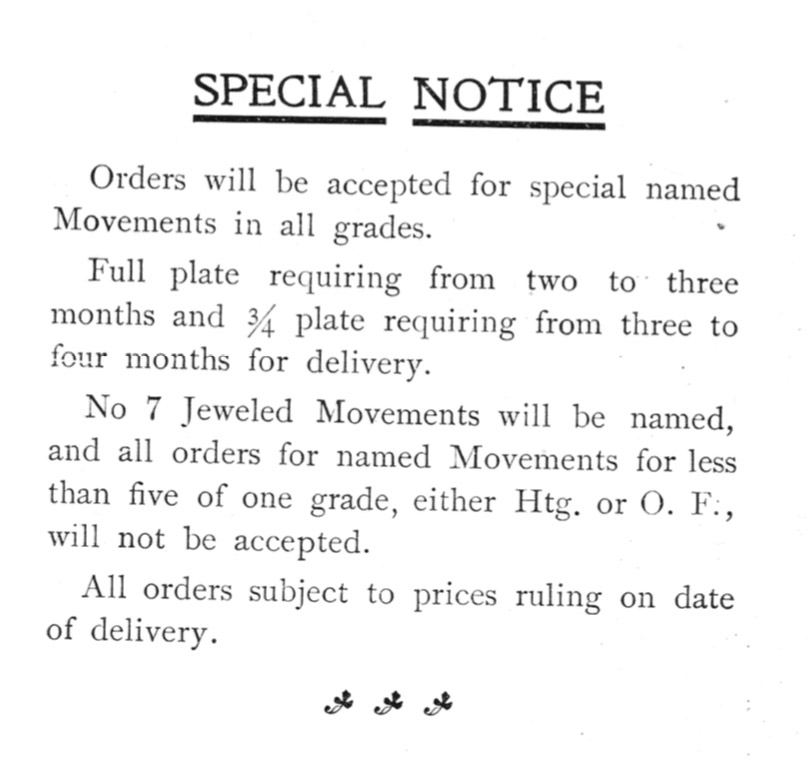 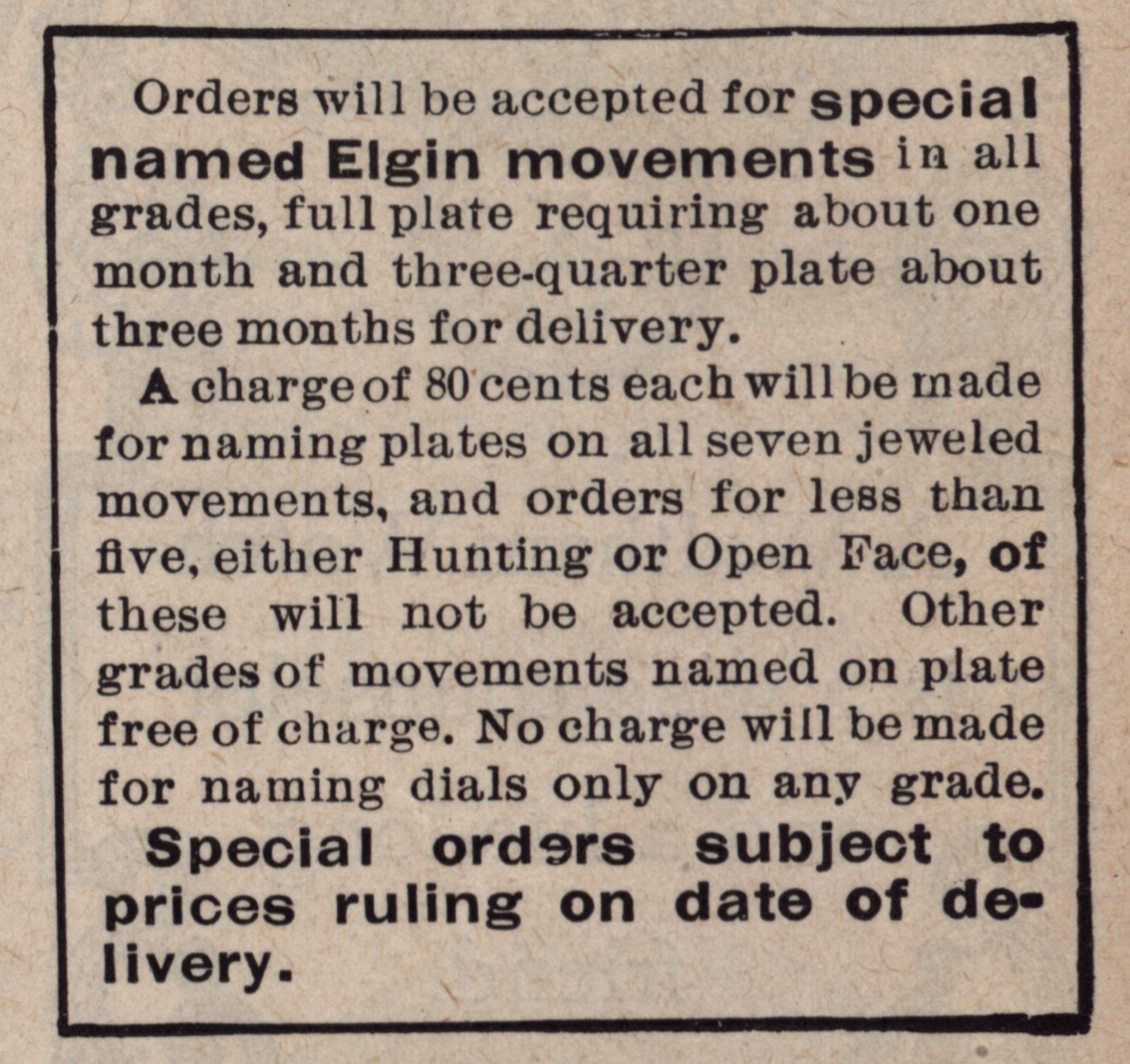 The vast majority of private label watches produced in America were manufactured between the 1880s-1910s. By the time factory-cased watches were becoming standard in the market, demand and availability for private labels began to wane.