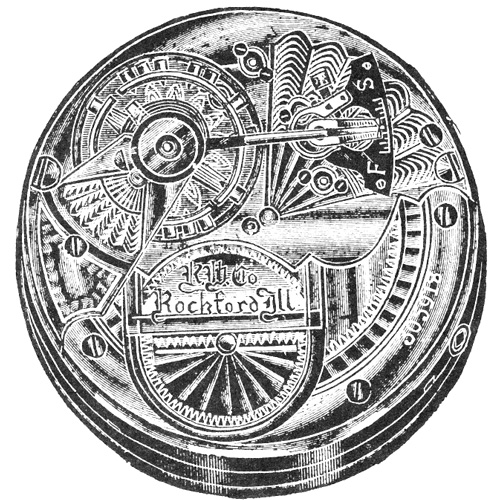 Grade 83 is a 15j Hunting watch maufacturered by the Rockford Watch Company. The size 18s, Model 8 movement features a nickel finish, though a single run of two-tone movements was also produced. Most Grade 83 movements are unadjusted. However, an upgraded option, sold as the "83x," was also available at a premium and was adjusted to temperature (marked "Adjusted").

The Grade 83 was one of the most popular products of the Rockford Watch Company with over 20,000 sold. This affordable mid-grade option offered customers a great value, and many private labels are found marked on Grade 83 movements. The grade was available as unadjusted (Grade 83) and adjusted to temperature (Grade 83x), though no differentiation is indicated in the Rockford Serial Lists. In the 1896 A.C. Becken catalog, the adjusted Grade 83x was sold at a $4.00 premium over the standard Grade 83. By 1899, the Grade 83x was no longer offered in the annual A.C. Becken catalog. However, the standard Grade 83 could still be purchased for $11.70. Despite the different levels of adjustment, all Grade 83 movements were fitted with a micrometric regulator. Early runs feature the "Type 4" regulator while later runs feature the "Type 5" and then the "Type 6" near the end of the Grade 83 production.

With 32 distinct runs, the Grade 83 is one of the best-sellers in the history of the Rockford Watch Company. Observations have confirmed that most runs are consistent, featuring nickel plates, 15 Jewels, and a micrometric regulator. Adjusted (Grade 83x) and Unadjusted (Grade 83) movements are mixed in a variety of runs. One run [286,001-286,200] is comprised of movements featuring an elegant two-tone finish, some of which are marked "Adjusted." The two-tone Grade 83 movements are uncommon, with an estimate production of 200.

One run [417,501-418,000] is designated as featuring 17 Jewels instead of 15 in the Rockford Serial Lists. A thumbnail image of movement #417655 appears to show that the center wheel is not jeweled. Other Grade 83 runs are listed as featuring 15 Jewels, and various observations have supported this. #417681 has been verified as marked "17 J" with features more consistent with the Grade 82. If the entire run was actually finished as Grade 82, production estimates would need to be revised accordingly.

Catalog your collection, upload images, maintain service records, and use our value guide.